Each year all OUAC athletes are invited to attend a warm weather training camp abroad. We typically spend 7-10 days in the Algarve, Portugal during the Easter holidays. A number of our coaches come with us to put us through our paces and ensure that we get the most out of our time there. Importantly, WWT is always a lot of fun and a chance to bond as a team. In recent years we have had up to 50 athletes attending and Portugal is always one of the highlights of our year. The trip is very reasonably priced and is often subsidised by the Achilles Club.

The trip provides athletes with an opportunity to train using top quality facilities and hopefully in excellent weather. It is a crucial part of our preparation for the summer season. We have been staying in Monte Gordo for a number of years now and it is fun training alongside international athletes and staying in a hotel just two minutes from the beach. Standard facilities include an 8 lane, well-maintained track, Olympic standard field event facilities, a fully-equipped gym and swimming pools - with physios and masseurs nearby.

The trip is important for fostering team spirit too. During our time away many of the all-important foundations are laid in generating a strong team spirit for the summer ahead. The trip provides athletes with the opportunity to get to know each other better, build up the camaraderie within the club and enjoy a relaxing break before Trinity term. You can’t underestimate the advantage of having a strong team spirit - a wise man once said, “It is in Portugal where the Varsity Match is won or lost.”

The trip is organised by our two Vice-Captains so do contact them for further information.

After a 2 year hiatus OUAC once again set sail for Monte Gordo, Portugal for our annual warm(ish) weather training camp. You would think that a group of Oxford students would be organised and have all the appropriate travel documents to hand when planning a trip abroad, however both Eniola and Moses appeared to forget there was a pandemic and forgot their vaccine passports leading to a long and expensive night in the airport. Even the Women's Captain Adahna failed at the first hurdle realising her passport was out of date a day before her flight, travelling several hundred miles to Glasgow to get an emergency one, catching a flight nearby in the nick of time to meet the rest of the club in Faro - all in all a pretty chaotic start before we'd even set foot in Portugal.

Having finally arrived at the Hotel Alcazar and fuelled by what we were assured were the Algarve's finest burgers the night before and an interesting assortment of cold meats from the buffet, OUAC headed to a drizzly track for the first day of the 'warm' weather training camp whilst OUCCC headed out on the first of their many long runs followed by a dip in the sea. Despite the wet weather, the first day of training can be considered a great success- no one from the long sprints group got injured! (yet). We wound down in the evening with some competitive games on the beach followed by speed dating in the evening giving a chance for everyone to get to know each other a bit better.

As the week progressed OUAC continued training strongly, with the jumps squad making use of the inclined track, whilst the throw squad enjoyed not only the multitude of throwing circles available, but also the array of cocktails on offer at the hotel bar in the evening. Our training, however, began to become slightly disjointed as after Archie was bed ridden for a day needing 'urgent' help in his room, the illness began to spread rapidly through the club with several more casualties around the middle of the week, some pointing fingers at Archie, others at the cold meat selection from the buffet. 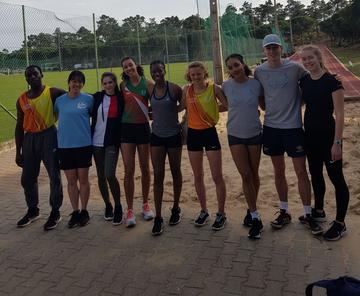 This didn't stop us from having a great night out prior the the rest day on Friday, investigating Monte Gordo's limited assortment of bars led by OUACs very own 'Music Man', before resorting to drinks on the beach and for some reason a 3 hour game of photo roulette until the early hours of the next morning. Feeling fresh the next morning and a day of rest ahead of us, we set sail on the ferry to Ayamonte, Spain, for a well-earned relaxing day in a picturesque Spanish town. We soaked up the culture, tucking into Paella, Tapas and some extremely bitter oranges enjoyed by our Kit Rep Isaac.

Speaking of kit, Isaac's slightly baggy Warm Weather Training vests becamse a hit with the whole club featuring prominently in Anika's OUACCC TikToks (go check it out), including er recreation of the famous Chariots of Fire beach scene. We continued training hard and enjoying life by the beach, meeting some French Olympians who were out filming promotional wideos, some OUAC members even got to feature!

Then came the legendary hole, an iconic symbol of our trip. What started out as a few OUAC visionaries digging a hole on the beach with their hands, after 2 days hard work eventually turned into a vast 6 foot deep hole capable of fitting most of OUAC inside it, getting us on the Olympians story and also trouble with the Portuguese police who instructed us to fill it in - they didn't seem as enthusiastic as us about our triumph. 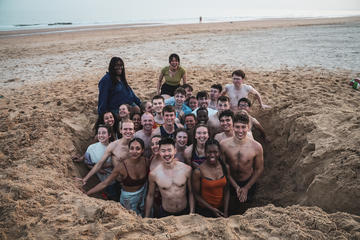 Having avoided a Portuguese jail cell, OUAC enjoyed the last couple of days in the sun, training strongly and consistently - that is apart from the long sprints squad whom, having started the trip with 7 (relatively) fit members,  were down to 1 non-injured, non-ill, non-spikes member - rumour has it they were scared of losing to the jumps squad in a 4x100. The last couple of nights included a quiz prepared by Adahna, es Presidente, Sam, Isaac and Adam, in which the prize was promised to be WWT vests that actually fit (still not received these yet Isaac), and also the important paper plate awards. 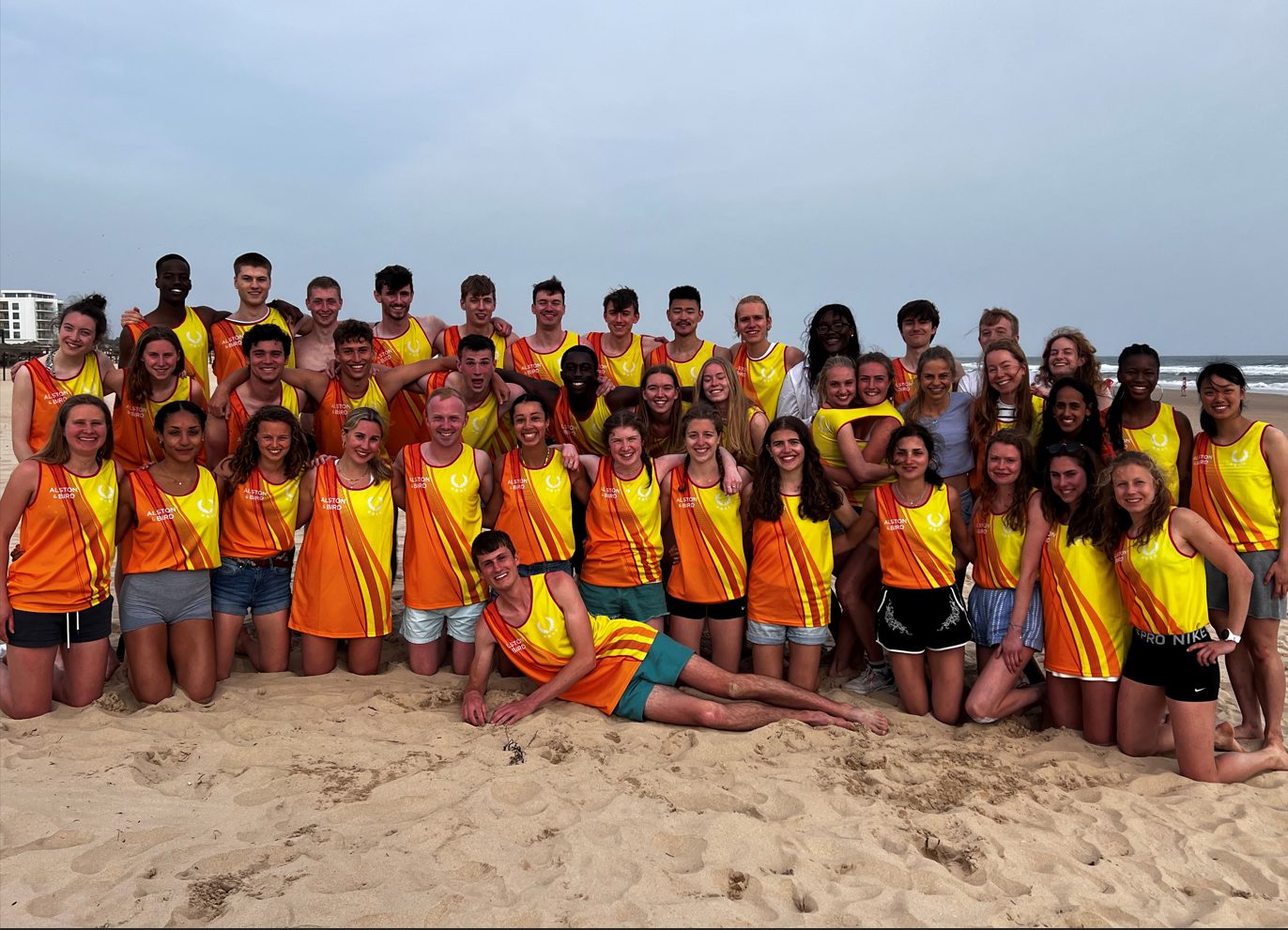